Look WHO Hooted His Way Into the MUSEBOX!

WHO do those people on TV think they are? Have you seen the commercial - the one making fun of us owls. They say we aren't as wise as people think we are. Take a look at the commercial spreading this ridiculous rumor!


Those silly owls must be paid actors. TRAITORS!

Do you think your creative writers can set the record straight? Maybe if they write some stories about some truly remarkable owls, we can stop this video from going viral.

You have to admit that the commercial is pretty funny. And they didn't say that ALL owls aren't wise - just some. As for my creative writers, I think they would love to write stories about some EXTRAORDINARY owls. Let's see what (or WHO) they come up with.

WHO can take Larry's challenge? If you write a story featuring an EXTRAORDINARY owl, you will earn $10 Melon Dollars per page instead of $5.

Here are some "What if" questions to get you started:

What if an owl was the president of a computer company? (Notice the picture of larry and the symbol behind him.)

What if you created a character named Owlbert Einstein?

Have a HOOT creating these stories!

Posted by Prof. Watermelon at 8:56 AM No comments:

Email ThisBlogThis!Share to TwitterShare to FacebookShare to Pinterest
Labels: MUSEBOX

I was walking around my neighborhood this weekend and saw one of the most beautiful crows perched on a fence. He bobbed his head up and down and made a low guttural caw-cawing sound. His feathers were shiny black, but with the autumn sun shining on them, a dark purple sparkled. I was mesmerized by this magical creature. I knew then and there that I had found our Weekly MUSE!


I went back to my writer’s studio and began researching this magnificent bird. Here is what I found:


Crows are not your ordinary “birdbrained” creature. In fact, crows are incredibly smart. Some researchers say that crows are as smart as chimpanzees and gorillas – a somewhat close relative to humans. WOW!
﻿
And crows have developed quite a close relationship with humans. In most places around the world, if you can find us, you can find them. The same could be said for rats, but rats try to hide from us while crows will sometimes try to find us.


Just like humans, crows have problem solving skills. They will make tools from wire and sticks to retrieve food from a hole. They will also place nuts in the middle of the road and wait for a car to crack it open. Take a look at the video to see this for yourself.

Crows are also very social birds. They travel together, live in families, protect each other, and even mourn the deaths of fellow crows. And if you cross a crow and cause him/her danger, he/she will call for help. Within moments a mob of crows will come to the rescue. They will scold you and possibly dart down at you from the overhead trees.


Crows can also remember faces. If you have ever caused a crow harm, he/she will not forget you. The crow’s family will unlikely forget you as well – and they are unlikely to ever forgive you.


But the most amazing insight I have learned about crows is their ability for friendship. In this video you will see two natural born enemies show love and compassion for one another.


Doesn’t that video just make your hear all warm and fuzzy. SMILE!


If you would like to learn more about crows and their common characteristics, look here.


With this new knowledge, what kind of story could you write? Maybe these WHAT IF questions will help you get started.


WHAT IF your main character (a human) becomes best friends with a crow?


WHAT IF crows go someplace magical at night, and your main character follows them to this magical place?


WHAT IF your main character understood the language of crows? Would this unlock secret knowledge about the human race?


The possibilities are endless, and please leave your own what if questions in the comment section below. I’d love to see what you come up with.


So, grab a cup of hot cocoa, a pencil and a piece of paper, and let’s begin. With your imagination, we can go anywhere. I look forward to seeing where you take us.


The word of the day is “mourn”. Here is the definition: to feel or express sadness for the death or loss of someone or something.
Posted by Prof. Watermelon at 2:58 PM No comments:

As many of you already know, I lived in Seattle for ten years. And for the most part, summer evenings were pretty quiet compared to those of Indianapolis.
I’m not talking about the sounds of people or cars or police sirens. I’m talking about the little, green monsters with wings that live in the trees. CICADAS!


For many, the sounds of cicadas are obnoxious and mind numbing, but for me it is music to my ears. When I hear the cicada’s whine, I remember that I am HOME. And that brings me comfort and happiness.
So, it looks like we have found our MUSE. 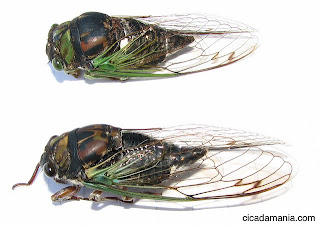 There are two general types of cicadas: annual and periodical.


Annual cicadas perform their life cycle within two years. Periodical cicadas perform a 13 or 17 year life cycle, making them the longest living insects in the world.
Here is how their life cycles work: In the summer a female tears a slit into a tree limb with her beak. She deposits her eggs inside. When the eggs hatch the small nymphs resemble a termite or a grain of white rice. These little guys suck on the tree’s juices.


Eventually, the nymphs will fall to the ground and begin tunneling into the earth. Here, they will spend most of their lives. Underground they continue to suck the juices from trees – this time from their roots.
When the time is right, the nymphs will begin digging back to the surface. They crawl across the ground until they find a tree to climb. And once they have found a secure place, they begin the last stage of metamorphosis. They emerge from their exoskeleton and leave the shell behind.


I used to hunt for these exoskeletons when I was a kid, and I still do today! Take a look at the photo and see the latest beauties I found.

Once the cicada’s wings are dry and ready for flight, they begin searching for a mate. The males make their signature whining sound to swoon a female, and the life cycle starts all over again.


The cicada I found was a “Dog Days” cicada. These cicadas are annual cicadas that are easy to find year after year.
Take a look at this video to see the amazing Magicicada! These cicadas emerge once every seventeen years.


As you just learned, cicadas come out in MASS numbers. But why?
Well, the cicada has many predators. For one, squirrels eat them like nuts. Birds, raccoons, opossums, foxes and even people eat cicadas, too.


But nothing compares to the infamous CICADA KILLING WASP. If you plan to write a story about a cicada, consider these bad boys as your antagonist. Take a look at this incredible video.

By the way, did you hear all the cicada "chorus" in the background of that video?


Here is one last interesting fact about cicadas. They LOVE lawnmowers! Yup, the twirling blades sound like a cicada PARTY!
With this new knowledge, what kind of story could you write? Maybe these WHAT IF questions will help you get started.


WHAT IF your setting was underground and the 17 year cicadas were planning their trip to the surface? What would they be feeling? Would they be excited? Scared? Sad?
The possibilities are endless, and please leave your own WHAT IF questions in the comment section below. I’d love to see what you come up with.


So, grab a cup of hot cocoa, a pencil and a piece of paper, and let’s begin. With your imagination, we can go anywhere. I look forward to seeing where you take us.
With Imagination,


Professor Watermelon
The word of the week is “exoskeleton”. Here is the definition: the protective or supporting structure covering the outside of the body of many animals, such as the thick cuticle of arthropods.
Posted by Prof. Watermelon at 5:55 PM 1 comment: