The Holidays are here, and the decorations are displayed. Store shelves are stocked with candy canes, snow globes and make-your-own gingerbread houses. Christmas trees are wrapped in twinkly lights, and the candles on the menorah are just waiting to be lit.

But every now and then, I feel as if something is watching me, and it’s not Santa Claus. 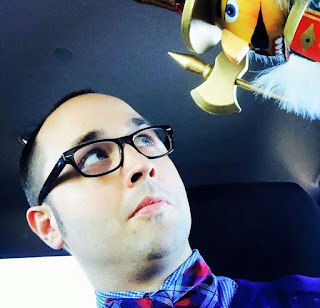 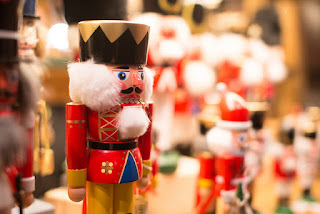 And this leads me to our Weekly Muse.

What are nutcrackers? And how did they become so popular around the holidays?

Well, I found some great information from the Nutcracker Museum in Leavenworth, Washington. This town is just a few hours from Seattle, across the Cascade Mountains. Here is the website.

Nuts have been a part of the human diet since, like, forever. And since some nuts are hard to crack, we’ve found some efficient ways of cracking them without cracking our teeth.

It wasn’t until the 15th and 16th centuries that woodcarvers made nutcrackers that looked like people and animals. And by 1872, Wilhelm Fuchtner of Germany began the mass production of the toy soldier nutcrackers we know today.

These toy soldier nutcrackers became even more popular when Russian composer, Pyotr Tchaikovsky wrote the ballet, “The Nutcracker”, which was first performed in St. Petersburg in 1892.

But let’s not forget the writer who started it all. If it were not for Ernst Theodor Amadeus Hoffman, Tchaikovsky wouldn’t have had a story to incorporate with his music. And maybe Fuchtner wouldn’t have mass produced his toy soldier nutcrackers, either.

Yes, E.T.A. Hoffman (arent’ we glad he went by his initials) wrote a story called “The Nutcracker and the Mouse King” which was the inspiration behind the ballet.

That’s a mouthful of names, isn’t it? Let me make break it down for you…

1. E.T.A Hoffman wrote the story, “The Nutcracker and the Mouse King” in 1816.
2. Wilhelm Fuchtner mass produced the toy soldier nutcrackers in 1872.
3. Pyotr Tchaikovsky’s ballet “The Nutcracker” was first performed in 1892.

And since this popular ballet is still performed all over the globe, the toy soldier nutcrackers are still seen today around the holidays.

Take a look at this video, which shows some scenes of the ballet. Make sure you look at the magnificent sets and costumes designed by famous children’s book writer and illustrator, Maurice Sendak.

If you would like to read a full summary of the nutcracker story, here is a link.

Also, take a look at this video of a mass production of toy soldier nutcrackers today.

With this new knowledge, what kind of story could you write? You can start by writing some “what if” questions. Here are few of mine. Feel free to use them.

WHAT IF your main character found a nutcracker buried in the snow after a blizzard? Who does it belong to? How did it get there?

WHAT IF your main character heard a knock at the door and found a nutcracker on the doorstep? What does this nutcracker want?

WHAT IF your main character is a nutcracker with a BIG idea? What is this nutcracker up to, and how will this cracker hatch his/her plan?

If you need more inspirations, here is a creative writing challenge:

Think of an extraordinary setting, like a castle, a cave or maybe even a different planet. Now, add a nutcracker character. How does this nutcracker fit into this setting? Is he/she the king or queen of the castle? Has a mysterious character hidden a nutcracker inside a cave? Why? Have aliens taken a nutcracker back to their home planet? Whatever the situation may be, what happens next?

The possibilities are endless!

So, grab a pencil and a piece of paper, and let’s begin. With your imagination, we can go anywhere. I look forward to seeing where you take us. 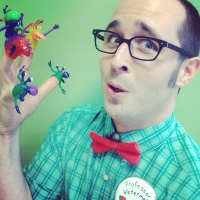