Frankenstein vs. Terminator (By: Ryan T.) 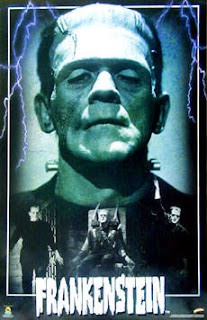 Chapter One: Frankenstein Gets a Pet

Once upon a……. whatever.  So, once there was a freaky maniac named Frankenstein.  He really was always alone. He sits in his mansion watching TV and eating potato chips.  Finally, he got his tushy up and said, “I NEED A PET!!!”

So, he went to the freaky pet store, and he went in and there was a real vampire sitting at the front desk.  “Hello, welcome to the Freaky Pet Store. How can I help you?” he said in a deep voice.

Frankenstein said, “Oh, can I have an 8 foot Cobra please?”


“Sure,” said the vampire. “Here is the food, and give him 5 cups of blood to drink every day, and this one is well trained.
“Thanks!” said Frankenstein.


“No problem,” said the vampire.
So, Frankenstein went home and he said to the pet, “I am going to call you Bob.” The Cobra smiled.


“Looks like you like your name,” said Frankenstein. Bob nodded.
So they went home and Frankenstein made Bob some food.
“Ok, so this is your food and here is 5 cups of blood,” said Frankenstein.
Bob wagged his tail and ate it with delight.  Frankenstein smiled, and he sat on his chair and turned on the TV, and he went on to cartoons, and then the TV shut off, and then guess who showed up on the TV screen? It showed the Terminator.
Chapter two: The Talk